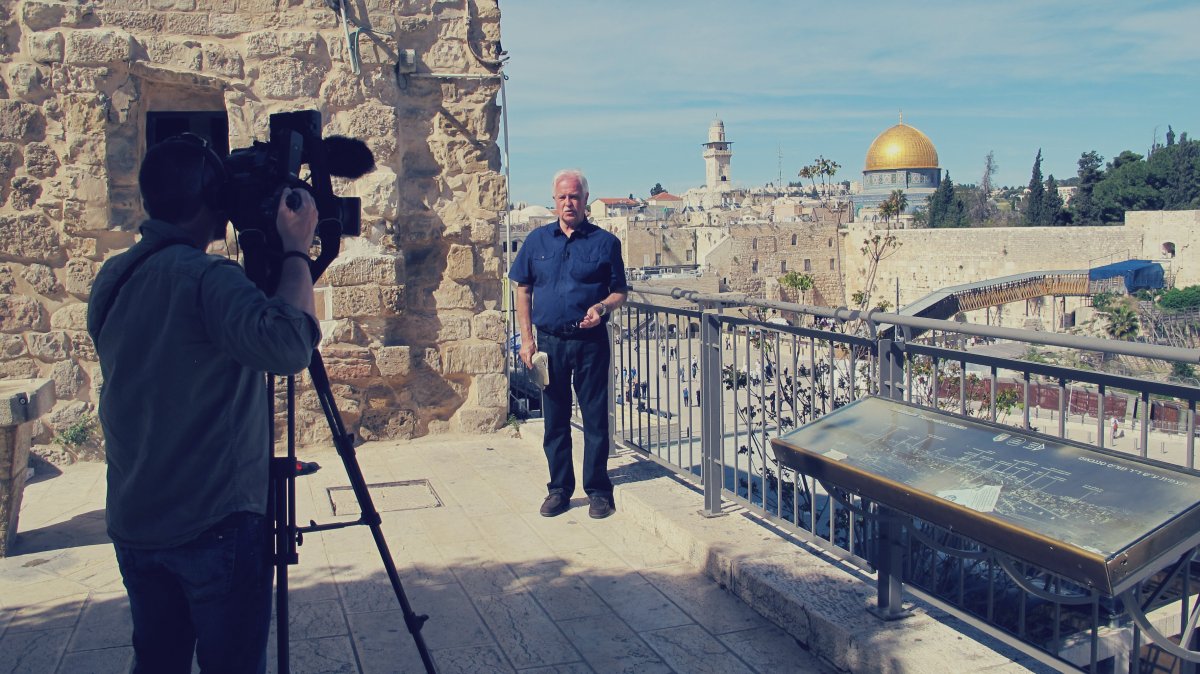 John Tweedie was born and raised in Northern Ireland. He immigrated to Ontario, Canada in 1967 where he subsequently met his wife, Clare, and where together they raised their family of four.

He received a B.A (Psychology) from the University of Guelph in 1977 and a M.Div. (Master of Divinity) from Emmanuel College, University of Toronto in 1980.

Dr. Tweedie was ordained to the Christian Ministry in 1980 and has served congregations in Alberta, British Columbia and Ontario. In 1988, he became the Founding Pastor of New Covenant Christian Fellowship in Brantford, Ontario.

In 2007, Dr. Tweedie received special recognition for his many years of service to the Christian Church, and especially for his efforts in support of the people of Israel, when he was awarded an honorary Doctor of Divinity Degree by Canada Christian College.

In June 2015, Dr. Tweedie relinquished all remaining congregational responsibilities in order to devote his time and energies to C4i and to the ministry’s growing influence through television.

Dr. Tweedie’s concern for Israel developed years earlier when, as a new Christian, he began serious study of the Bible and began to understand God’s love and purposes for Israel: the land, Covenant People and nation. Thus, Israel and God’s unchanging love and purposes for His Chosen People, as defined by Covenants, became a distinctive of Dr. Tweedie’s ministry - something he continues to speak passionately about at every opportunity. Gradually, he gained a reputation among peers as a pro-Israel Christian pastor and leader.

In 1997, and because of this concern for the well-being of the people of Israel, he was asked to help establish a Canadian branch office of Christians for Israel International, a European based ministry established in 1979 for the benefit of Israel and Jewish people. Christians for Israel Canada now functions as an independent Canadian charity but   enjoys cooperative associations with like-minded ministries around the world.

In June 2002, at the height of the Intifada (Second Palestinian uprising), Dr. Tweedie was one of several Christian leaders who participated in a joint solidarity tour to Israel co-sponsored by Christians for Israel and B’nai Brith Canada. From 2003 to 2006, and as yet another way of standing with the Canadian Jewish community, Dr. Tweedie was a featured guest each Sunday morning on Zelda Young’s Toronto-based Shalom radio program. He offered weekly comment and words of encouragement from a Christian perspective to the primarily Jewish listening audience. He has spoken in synagogues, at various Jewish venues, and has been a plenary speaker at Toronto’s Annual Meeting of Yad VaShem’s ‘Holocaust and Martyrs’ Memorial.’

Christians for Israel Canada was incorporated in 1997 and, in Oct. 2005, received official recognition as a Canadian Charity. Its stated mission is: "…to present a biblical perspective of God’s plans and purposes for Israel and the Church.”

C4i’s stated vision is: "…to see the truth we proclaim cause nations to support and bless the people of Israel.”

This is a no-strings-attached mandate of support. C4i invariably works hand in hand with Jewish charities to provide food for the hungry, humanitarian aid, after-school care and support for children at risk, assistance for poorer immigrants to Israel and other projects established for the benefit of Israel’s poor and marginalized people, Arab and Jew alike. www.c4i.ca

Christians for Israel’s educational initiatives are directed toward Christians, both individuals and congregations, and include the following:

This is a bi-monthly newspaper sent free to all who subscribe as a means of creating new understanding of Israel while, at the same time, counteracting media distortions. The U.S. version of the newspaper is called Israel: The Prophetic Connection.

C4i’s first DVD teaching series called Why Israel? was released in 2005 and is  available in English, Russian and Romanian language versions. Associated Study Guides are also available in various languages. The series, filmed both in Canada and on location in Israel, features Dr. Tweedie as he teaches on a broad range of subjects including the rebirth of Israel (in 1948) and anti-Semitism.In 2014, the English version of Why Israel? was replaced by "Between Heaven and Earth”, a 13 week teaching series based upon Season 3 of Israel: The Prophetic Connection, a new made-for-T.V series (see below).

Israel: A Journey Through Time

The second DVD series entitled Israel: A Journey through Time was released in 2008.  It was also filmed entirely on location in Israel. This series offers a 4,000 year historical and biblical overview of Israel from Abraham’s divine call to Israel’s ongoing struggle to survive as a Jewish homeland in the current hostile environment that is the Middle East.

Israel: A Journey of Light

A third DVD series, and a sequel to Journey Through Time entitled Israel: A Journey of Light was released in 2010. This series examines the outcome of God’s promise to Abraham, that his descendants through his son Isaac would be a blessing to all nations. The series traces Jewish influence and accomplishments down through history against a backdrop of unending prejudice and persecution.

Both ‘Journey’ series have aired worldwide via weekly showings on TBN (Trinity Broadcast Network).  Israel: A Journey Through Time and Israel: A Journey of Light are available in stores, at digital retailers and online at Amazon.com.

C4i’s latest initiative is a made-for-TV series, also filmed entirely in Israel called Israel: The Prophetic Connection. This series began airing on Canadian TV outlets in July 2012 and on select U.S. networks at the end of that year. It now airs in primetime across North America. The show features a biblically prophetic exploration of Israel, past, present and future with Rev. Dr. John Tweedie as host.

In April, 2018 The Prophetic Connection began airing globally in more than 200 nations via Inspiration TV: http://ini.tv/ways-to-watch#hero

C4i America: Because of the U.S. television thrust, a branch American charity was established in 2012 as a sister branch of C4i Canada. The charity was granted 501 (c) 3 standing effective October, 2012. This allows the U.S. charity both to receive and receipt, for income tax purposes, donations from Americans. A designated US website, c4iamerica.com facilitates donations and/or the purchase of C4i resources.

Dr. Tweedie continues to serve as Chairman of Christians for Israel Canada and  President and CEO of C4I America. He also serves as the Managing Editor of Israel & Christians Today (called Israel: The Prophetic Connection in the US), a bi-monthly newspaper that is produced and distributed in several national versions for the English-speaking world.

On January 17, 2018, at a special Gala held at The Avenue Convention Centre, Airport City, Tel Aviv, Dr. Tweedie received The Jaffa’s Institute’s highest award, the prestigious ‘Pillar of Righteousness’, given in recognition of C4i’s more than 20 year history of standing behind The Jaffa Institute in its efforts to help Israel’s children at risk and to relieve poverty and hunger among the poorest of the poor, including many Holocaust survivors.

Having visited Israel for the first time in 1980, Dr. Tweedie continues to lead solidarity tours to the land as a means of raising awareness among Christians concerning Israel’s right to exist as a Jewish nation within secure borders. The tours are a tangible way for Christians to express solidarity with Jewish people.

In summary: Once asked why he had accepted ever-increasing responsibilities with C4i (Christians for Israel) in addition to his church responsibilities, Dr. Tweedie explained that, over time, he began to understand that God had placed two calls on his life: one was to the Church as a serving minister and the other was an unmistakable call to the House of Israel, that is to speak out passionately in support of the Jewish nation and for the rights of Jewish people everywhere.

All funds charged in US Dollars

The PURPOSE of C4i is to call Christians to express love in action to the people of Israel.

Our MISSION is to present a biblical perspective of God’s plan for Israel and the church.

Our VISION is to see God’s truth proclaimed so that nations will support and bless the people of Israel.